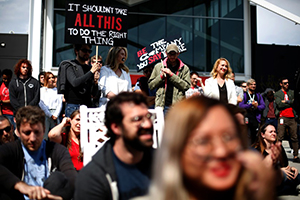 The last two years have witnessed a wave of walkouts, petitions and other workplace actions at video game and tech companies.

But despite this swell in labor activism, employees at no major video game studios and only a handful of tech offices have formally voted to form or join a union.

A new campaign launched Tuesday by one of the nation’s largest labor unions — and spearheaded by one of the leading video game industry activists in Southern California — aims to change that.

The Campaign to Organize Digital Employees (CODE for short) is a new project of the Communications Workers of America aimed specifically at unionizing video game and tech companies.

It grew out of conversations between the CWA and Game Workers Unite, a grass-roots organization that sprang up in 2018 to push for wall-to-wall unionization of the $43-billion video game industry, alongside conversations with organizers across the larger tech industry.

Separate from the new initiative, the Toronto chapter of GWU has also signed a formal partnership agreement with CWA to work on organizing in the area. (CWA is also the parent union of the NewsGuild, which represents workers at the L.A. Times and most major newspapers in the country.)

“We’ve been watching the amazing organizing of workers across the industry,” said Tom Smith, CWA’s lead organizer. “And workers themselves reached out to us while doing that amazing self-organizing, and said, ‘Can we do this in partnership with the CWA?’”

The union declined to specify how much money it was putting behind the new effort, but has put two organizers on payroll to lead the push with support from dozens of CWA staff members across the country.

One of the new staffers, Wes McEnany, comes from a more traditional labor organizing career with Boston-area unions and the labor-backed campaign for a $15 minimum wage. CWA also hired Emma Kinema, who co-founded Game Workers Unite and organized the Los Angeles and Orange County chapters of the group.

The dedicated staff and national ambition set the CODE project apart from other efforts to organize tech workers, such as the United Steelworkers-backed Pittsburgh Assn. of Tech Professionals, which successfully unionized Google subcontractors in September.

“In my experience self-organizing in the game industry, people are very bottlenecked by the lack of resources and lack of legal know-how and a lack of funding — it’s very tough,” Kinema said. “The decades of experience and resources that come from partnering with an organization like CWA can take it to the next level.”

Working conditions in the video game industry have brought the question of unionization to the forefront in recent years. At a 2019 video game developer conference, the industry’s practice of making employees work 100-hour weeks for months on end to finish a game in time for the preset delivery date, often without extra pay — a practice known as “crunch” — came under fire in discussions among workers, as did the rolling layoffs that come when companies staff up and shed jobs to fit cyclical production schedules.

And in the tech industry writ large, workplace actions have extended beyond concerns over bread-and-butter issues such as pay and severance to questions of ethics and culture. The worldwide Google walkouts, and the walkout at Los Angeles game studio Riot Games that followed, grew out of employee demands to end the practice of forcing workers into private arbitration instead of allowing them to sue over claims of sexual harassment and workplace discrimination.

Other actions, such as the walkout at online furniture seller Wayfair and a number of petitions filed by workers at Amazon, Microsoft and Salesforce, have pushed back against corporate decisions to work with Immigration and Customs Enforcement or the Department of Defense. And Irvine-based Activision Blizzard faced internal and external protests in late 2019 after it punished a professional gamer who made statements supporting the pro-democracy protests in Hong Kong.

The organizers behind the new effort see the push for better working conditions and corporate ethics as one and the same.

“I think it’s a false dichotomy to frame the activism of a lot of tech workers around the impact that the work they do has on society as something other than a fundamental working condition,” Smith said. “For a lot of folks, that’s what led them to do this work in the first place, and people are feeling a disconnect between their personal values and what they’re seeing every day in their working lives.”

In December, CWA filed official charges against Google with the National Labor Relations Board on behalf of five Google workers who were fired in what they say was retaliation for their organizing at the tech giant.

The new project charts a path away from organizing video game workers along the Hollywood craft union model. SAG-AFTRA has represented video game voice actors for years, and called a strike in 2017 over pay and royalty structures. But CWA largely follows the industrial union model, which organizes entire companies at once rather than splitting workers who perform different jobs into specialized unions.

Smith, for his part, said that CWA could accommodate craft-based organizing if that’s what video game or tech workers want, emphasizing that the workers will ultimately decide how to organize. But Kinema saw the decision to join CWA in starker terms.

“We believe workers are strongest when they’re together in one shop in one union, so the disciplines can’t be pitted against each other—none of that’s good for the workers,” Kinema said. “I think in games and tech the wall-to-wall industrial model is the best fit.”