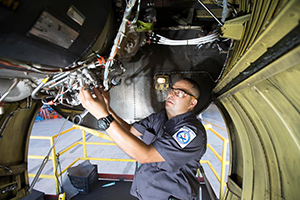 After four years of negotiations, American Airlines has reached a tentative contract agreement with the unions representing its mechanics and fleet service workers.
Valued by unions at $4.2 billion, the deal includes five separate agreements covering mechanics, fleet service and related groups including maintenance trainers. It requires ratification by union members.

The agreements also provide “an industry-best profit-sharing formula,” the unions said. That formula, far higher the 5% American currently offers, could set a model for what other work group will get: It provides 10% of American’s first $2.5 billion of pre-tax income as well as 20% of pre-tax-income above $2.5 billion.

The deal protects against outsourcing and offshoring, with a cap on offshore maintenance work.

It also protects the pension plan of workers represented by the International Association of Machinists, one of the country’s few remaining defined benefit plans, for workers at IAM bases including Charlotte, Philadelphia and Pittsburgh. Workers at bases represented by the Transport Workers Union get the same amount of company contribution to their pension plans, but it goes to a 401K plan. The existing IAM health care plan is also protected for workers at IAM bases.

The IAM and TWU represent about 31,000 mechanics and fleet service workers at American.

The two unions finally have a joint contract following a 2013 merger between American, with TWU representation, and US Airways with IAM representation.

“The negotiating team had the option of accepting an inferior contract quickly, or doing the hard, time-consuming work of fighting for the best contract possible,” said Sito Pantoja, association chairman and Alex Garcia, vice chairman, in a prepared statement.

“Together, after more than four years, the terms of these agreements are proof that we took the right path and achieved the best contracts in the airline industry,” they said.

TWU President John Samuelsen said, “This contract is a victory for the union’s membership.

“We’ve secured industry leading increased wages, significantly improved our working conditions and, very importantly, increase the amount of aircraft maintenance work which will be performed in the USA,” Samuelsen said.

American CEO Doug Parker said, “Our Maintenance & Related and Fleet Service team members are the very best in the business and work incredibly hard to care for our customers, “They deserve contracts that include meaningful improvements in pay, quality of life and job protections,” Parker said in a prepared statement. “ The tentative agreements deliver on all of these — and more. We appreciate the Association and company negotiators who worked so hard to get us to this day, as well as the National Mediation Board for their guidance.”

The negotiations were both lengthy and bitter, leading to a work slowdown and a court battle and contributing – along with the grounding of the Boeing 737 MAX – to American’s extremely poor summer operating performance in 2019.

It was not until May 2015 that the association was certified as the collective bargaining agent. Bargaining began in December 2015 and continued at a slow pace. In the meantime, American signed deals with its other work groups and is negotiating second post-merger deals with both flight attendants and pilots.

In 2016, with negotiations going slowly, American raised pay for association members, a positive gesture but one that may have further slowed the pace. In late 2018, the NMB assumed oversight of the process.