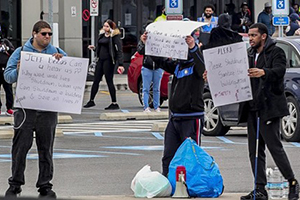 Thirteen attorneys general asked Amazon to disclose the number of COVID-19 infections and deaths among its workers, data a top executive described as “not particularly useful” in an interview on “60 Minutes” that aired Sunday.

The attorneys general, including Washington’s, also sought details of health and safety measures put in place by Amazon and Whole Foods Market and evidence that the companies have complied with state paid sick leave laws. The attorneys general also urged Amazon to reinstate the unlimited unpaid time off policy it canceled at the beginning of the month. They cite local reporting on deaths of at least two Whole Foods workers — in Portland and Swampscott, Mass. — and say a failure to disclose material information to consumers could violate consumer protection laws.

“Amazon and Whole Foods must take every possible step to protect their employees and customers during the COVID-19 pandemic,” Massachusetts Attorney General Maura Healey said in a news release. “We again call on these companies to provide assurances that they are complying with state laws and federal guidance aimed at keeping essential workers safe during this crisis.”

Meanwhile, employees are looking ahead with trepidation to May 16, when Amazon’s $2-an-hour coronavirus pay increase is set to expire. Dave Clark, Amazon’s senior vice president of worldwide operations, said in the “60 minutes” interview that executives have not yet decided whether to extend the pay increases.

Amazon executives and spokespeople have consistently declined to disclose a tally of the pandemic’s toll on the company’s 935,000-person workforce. An employee in Indiana, Jana Jump, has tracked more than 600 cases and at least six deaths among the company’s workers.

“I don’t have the number right on me at this moment because it’s not a particularly useful number,” Clark said in the interview. He said infection rates among the company’s workers have been generally “just under” rates in surrounding communities.

The attorneys general want Amazon to provide infection tallies on a state-by-state basis.

They also asked for the company to document its compliance with state paid sick leave laws, and said in the letter they were “deeply disappointed” that Amazon has not offered more generous paid leave to employees, comparable to what’s available at companies with fewer than 500 employees under the Families First Corona Response Act.

Paid sick leave is among the demands Amazon workers have made in petitions, isolated walkouts and interviews during the pandemic. The company has said employees diagnosed with COVID-19 or placed in quarantine would receive up to two weeks of pay. It also allows employees to apply for unpaid leaves of absence, but those who don’t qualify can now be fired if they don’t come to work out of safety concerns.

“If there’s no reason not to be at work and you choose to stay home … you’d have to use your unpaid time off or [use] your other paid time off options in order to remain at home,” Clark said in the “60 Minutes” interview. “And if you run out of all those options you would need to come back to work or yes, it would result in separation from [the] company.”

Amazon has detailed the health and safety measures it is implementing in response to the pandemic, and their costs — as much as $4 billion in the current quarter. Clark led a video tour of what appeared to be Amazon’s Kent fulfillment center, highlighting automated temperature scanners at the entrance, coronavirus testing on site, mobile hand-washing stations, disinfectant sprays and other measures.

“I think we’ve been early on the curve to this than most employers, particularly major employers in the U.S.,” Clark said.

The attorneys general suggest that the measures the company has taken are not being consistently deployed across Amazon’s hundreds of warehouses and grocery stores: “We are dismayed to have heard multiple reports of Amazon warehouses with inadequate PPE and hand sanitizer, inability to practice social distancing, limited opportunity to wash hands, and other deficiencies that put employees at risk.” They note that Amazon has attended immediately to specific health and safety concerns raised by some attorneys general individually.