A 'Huge Victory’ for International Students 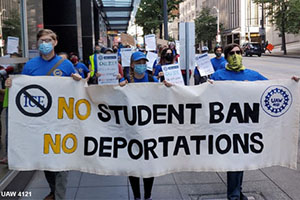 By Sam Sumpter and Dan Hart
Special to The Stand

One week after issuing a directive requiring international students at U.S. universities to attend classes in person or face deportation, the U.S. Immigration and Customs Enforcement (ICE) abruptly rescinded its directive Tuesday in the face of lawsuits, political pressure, and collective action by thousands of unionized academic workers across the country.

The directive could have forced any F1 or M1 visa holder — which is most of the international student population in the U.S. — to leave the country this fall if enrolled in a university that had taken steps to protect their students, faculty and staff from COVID-19 by implementing remote learning. Such a move would have massively disrupted the ability of universities to make progress on COVID and other critical research, as international students and scholars are a key workforce responsible for advancing our understanding of public health impacts. A growing number of international students and scholars have unionized in recent years.

“This is a huge victory for the organizing work of international students and scholars and our allies in University administrations and government,” said Nayon Park, an international student from South Korea at the University of Washington and member of UAW Local 4121’s International Solidarity Working Group. “As unionized academic workers, we have unique power and leverage in shaping and responding to important political decisions like this one.”

On Monday, UAW Local 4121 members organized a successful direct action at the Seattle ICE field office, in coordination with UAW members protesting at ICE offices in San Diego, Los Angeles, San Francisco and Boston. This followed a week of action: petitioning UW to create a majority non-citizen Task Force; organizing an information and strategy session (watched live by nearly 6,000 viewers), assisting UW Administration, AG Bob Ferguson, and the Harvard plaintiffs with litigation development, and coordinating with allies like Rep. Pramila Jayapal, who organized an information session with UAW and other stakeholders after publishing a letter condemning the Directive along with Senator Elizabeth Warren and others.

Prior to ICE rescinding its directive, a District Court judge in Massachusetts was set to hear arguments on whether to issue an injunction in a suit brought by Harvard University and MIT and joined by unions representing academic workers including the UAW, AFT and SEIU.

International students and scholars have always faced challenges and precarity on account of their status as visa holders. In recent months, however, the federal government has levied an onslaught of xenophobic attacks against international workers, from requiring students to attend classes in person during the COVID-19 crisis or risk deportation, to restricting visas, to the Muslim travel ban, to attacks on Chinese scholars and more. These actions have created tremendous stress, concern and uncertainty for international students/scholars and their futures. They have also threatened the ability of U.S. universities to attract the best and brightest minds from across the world.

Kaitlyn Boulding, an international student at UW in the UAW 4121 International Solidarity Working Group, echoed the sentiments of many academic workers who want to focus on the important contributions they make to teaching and research, rather than distractions.

“I am very angry that instead of supporting graduate students working towards greater health, safety, justice, and equity across the globe, the administration continues to try to undermine our efforts,” Boulding said.

Unionized academic workers have demonstrated the power of collective action in ensuring that university campuses and other workplaces are welcoming and supportive of all regardless of citizenship status. Despite Tuesday’s victory, Sumyat Thu, an international student at UW and UAW 4121 international solidarity working group member, reflected on the efforts required to meet the challenges ahead: “We have organizing power to shape policies to be more just and equitable for all. We have to stay alert at ongoing policies and injustices against marginalized communities and continue to resist.”

UAW Local 4121 is the Union at UW of Academic Student Employees and Postdocs.  We are RAs, TAs, Tutors, Graders, Trainees and Fellows – students the University hires to do instructional and research work. We are more than 6,000 strong at all 3 UW campuses: Seattle, Tacoma, and Bothell. UW works because we do.